NO MORE “HUSTLE”: Making the Shift from “Blind Ambition” to “Aligned Ambition” 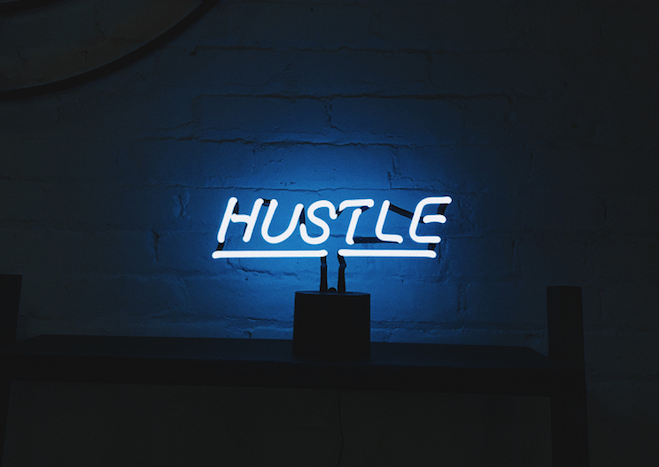 I just don’t believe in “hustle”.

At least as it pertains to purpose, fulfillment, success…or any of the things that you’re undoubtedly here looking for.

Neither “busy” nor “hustle” necessarily equal, or even lead to, “success”.

“Climbing the ladder” and “10-year plans” are not the road to “success”.

But then again, if you’re here reading this, you’ve probably discovered that already!

What I’ve seen over and over again in my practice, and in my own life, is that most “underfulfilled overachievers” have “hustled” for years and years, including all our “side hustles”, to get to some end goal and vision of success, and then when we get there, we discover that it doesn’t feel like what we thought it would. The happiness that we were promised we would have when we got “there” just doesn’t exist!

I often describe this as the sensation of “having a great life, it just isn’t my life.”

The problem with the paradigm of this “hustle” kind of success, as we’ve been sold it, is that it upholds an objective version of “success”.

But, success isn’t one-size-fits-all. Success is not arbitrary. It is deeply personal.

What most humans actually want isn’t to “have” success, which is where “hustle” sends us, but rather we want to feel success, which requires another ingredient of alignment.

Feelings are never objective, and telling ourselves how to feel based on how others have responded or reacted, doesn’t usually work.

This is why we must make the shift from “blind ambition” (aka “hustle”) to “aligned ambition”.

“Blind ambition” is the old way of doing things and where “hustle culture” tends to live. You put on willful “blinders” and you straight hustle. You are achieving according to a generic, arbitrary and external definition of success. It’s the stuff of 10-year plans and climbing ladders and linear, set and predetermined career paths.

“Aligned ambition”, the new alternative paradigm, is where you are achieving according to the work that you are uniquely well-suited to do in the world. This is an inner-directed process of consciously creating a career that is particular and specific to you, and no one else.

“Aligned ambition” is just as likely to lead you to external success as blind ambition, but is also GUARANTEED to lead to a fulfilling, purposeful success, in which you actually feel successful (instead of like an imposter).

Let’s take an example of going to law school, and then following a path of blind ambition vs. aligned ambition:

If you are told that success is becoming a partner in a top law firm by 30, and you blindly achieve that, it’s a total toss-up as to whether that will actually meet your particular intrinsic blueprint for success. You have about as much of a chance of finding success in the blind achievement of becoming lawyer, a doctor, a tenured professor, a CEO, a prize-winning novelist etc. but NOT all of those paths are created equal in terms of fulfillment.

It’s total success roulette. Spin the wheel, pick an arbitrary path, and hope that it’s the “right” one and will lead you to fulfillment and purpose when you arrive. Pretty crazy, right?! The great irony is that most people think they are being risk-averse, “playing it safe” and being responsible and practical in their career choices by setting their site on “partner at law firm by 30”, when, in fact, it’s the riskiest thing you could do with career and your life: to build a career, and a life, on the shaky chance game “success roulette”.

On the other hand, if you were to follow an aligned achievement path, you may start out heading towards becoming a partner in a law firm, but realize in law school that actually you’re way more interested in teaching and legal scholarship than serving clients, and begin to gravitate towards different classes, different internships, than the ones that are said to be the “most strategic” and “most marketable” for being hired at a top corporate law firm, for example. If you end up becoming a tenured law school professor at a top law school, or a partner at a top tier law firm, I think most people would see both of those two things as “success”. BUT, for the person whose aligned ambition was to become a law professor of constitutional law, and was meant to be doing legal research, and public policy advising, and being around a university campus all the time, the “success” of being a partner at a law firm is going to feel like success. In fact, it will probably feel empty and sickening.

Because there’s pretty much no situation in which a food analogy isn’t useful…“success” and achievement are as deeply personal as taste preferences. You could be served the most objectively high-quality, expensive as hell, steak, prepared by the most famous chef in the world, and if steak disagrees with your palate, none of those things matter. It’s just not going to taste good, no matter how much everyone around you tells you it is the most extraordinary thing in the world.

As long as you are blindly hustling along an arbitrary roadmap of career success, you’re going to feel lost.

Make the switch to aligned ambition, I beg of you! It’s easier and more intuitive than you think, and it feels SO damn good! You can always refund your misery…

Plus, I have a lot of (free) resources here to get you started: